⇑      Because the revised visors have been introduced in MY 2018 MX-5 vehicles, they were expected to be seen in MY 2018 124 Spiders as well, but that apparently didn’t happen.  The re-design may not function any better than the first year’s version (they still can not be pivoted to the side or above the header), but there is no doubt that they not only look better, but the cover for the enlarged mirror seems to be much more robust.

Note: If the 1st generation visors are closed aggressively without first closing the mirror cover, the covers tend to catch on the anti-rattle rubber bumpers, eventually breaking one or both of the plastic lid hinges. 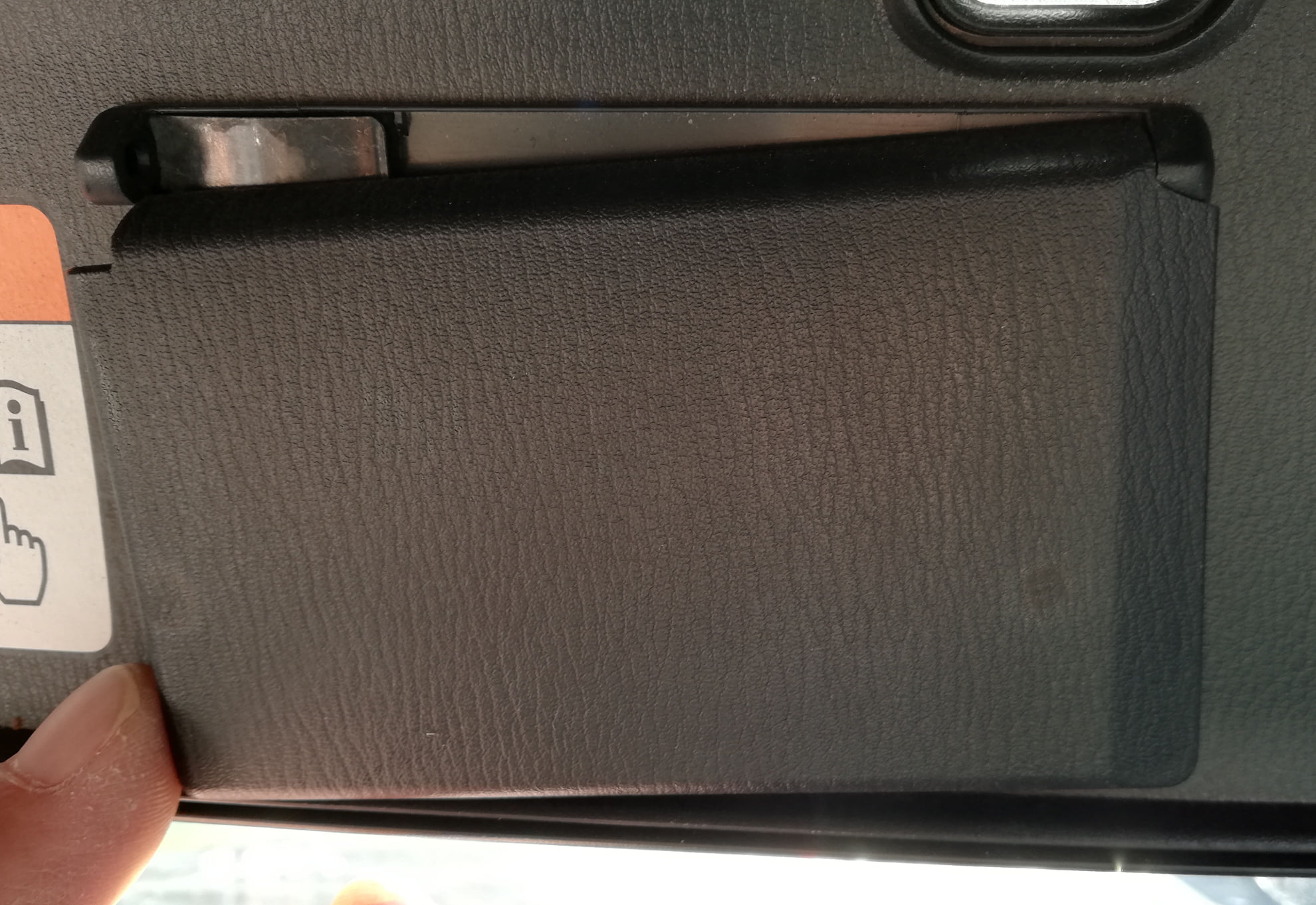 broken plastic hinge pin can be drilled out (3 mm) to allow for a metal pin in its place. Super-glue and trim off to complete.

For those that may feel the need to upgrade the visors, it appears that since the mounting configuration of the restyled 2nd-generation header trim assembly (which includes the visors) hasn’t been altered, know that it is an expensive direct replacement installation in our 124 Spiders, but you’ll have to source it from a Mazda parts distributor.

The new header is the same color (black), and for LHD vehicles, the Mazda part # is ND1F-68-09Z 02 (thanks Tobias).  This particular part # comes with English airbag warning labels on both sides of the passenger-side visor (none on the driver’s side; see the slide show below).  There are other part #s that accompany RHD, airbag labels in other languages, and assemblies that have the intrusion alarm bits included, but if you are replacing your header, chances are you can transfer those parts yourself.

[UPDATE 5/3/2020]
Tobias observed that the airbag vinyl label removal process that works so well on the first-generation visors, doesn’t work so well on the new vinyl-wrapped visors, as the bonding is much stronger.

[UPDATE 3/14/2021]
Apparently not satisfied with his first attempt at replacing the factory vinyl wrap on his second-generation visors with Alcantara to complement the rest of his interior, Tobias has committed to disassembling the entire header piece to allow for a proper job this time.  He has provided details, along with additional disassembly photos of the visors in his new comment below, and I expect we’ll see a nice photo of the completed job in the near future. 🙂 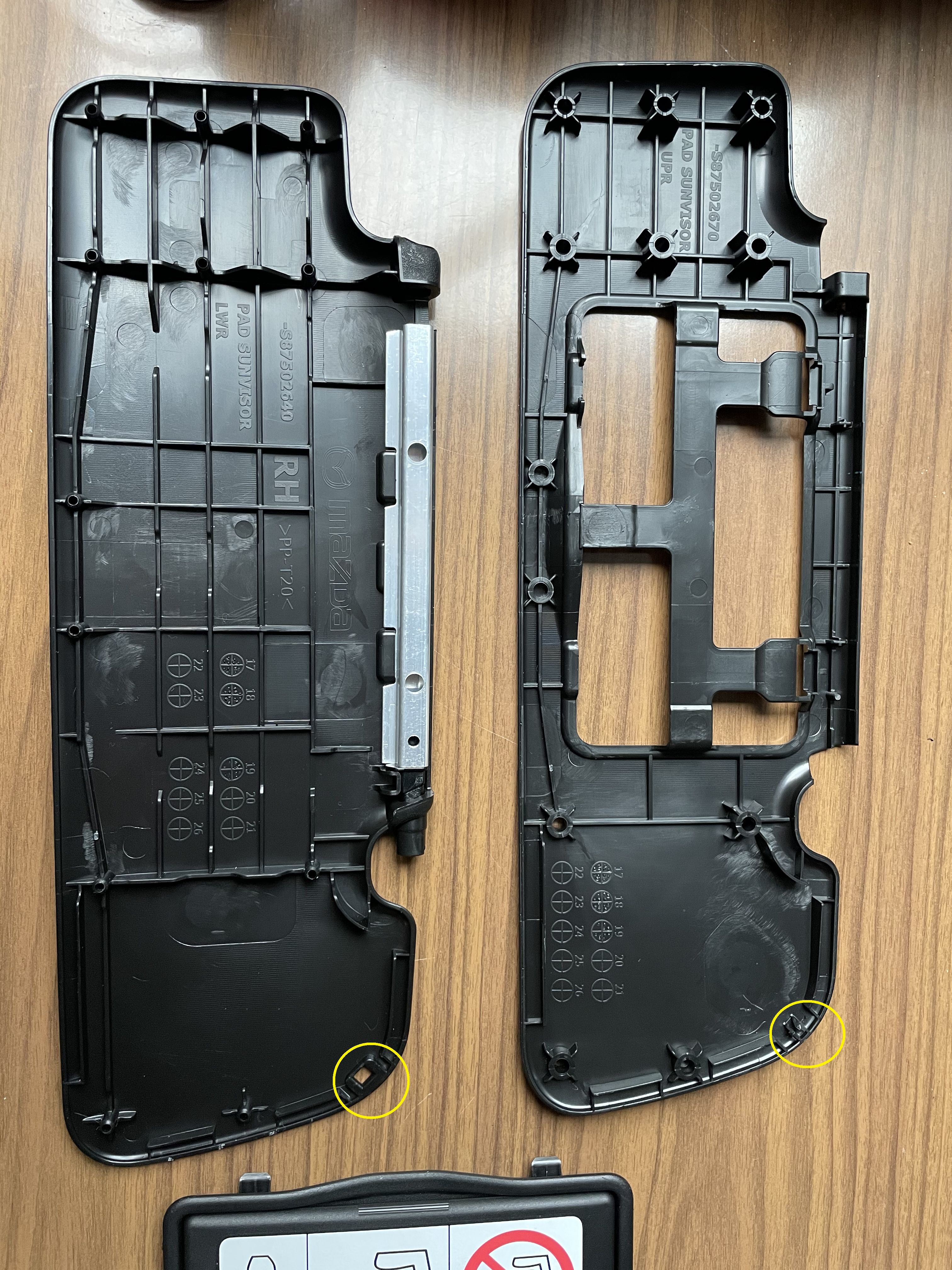 [UPDATE 3/23/2021]
Well, Tobias submitted photos of the finished product – him and his dad went over the top, and covered the entire header assembly with Alcantara! He states that the visors were pretty easy, but the rest proved to be pretty challenging. His Spider is one-of-a-kind now. See his comment for more photos and details. Thank you Tobias.

[UPDATE 6/13/2021]
magoffin posted photos of his new header (see slide show above), and MikeL provided his online source, that sold him the unit without requiring a Miata VIN # (they accepted Fiat 124 as the intended vehicle). Per TX_Bandit:

♦ Drop the top.​
♦ Pull off the left and right pillar covers – they just snap in and out.​
♦ Remove (6) star drive screws in the header: (2)T40 and (1)T30 on each side.
♦ Give the header a light tug and it will come free, but be sure to unplug the interior courtesy light when the wiring is exposed.

30 thoughts on “Upgrading the Minimalistic Visors”