We should all be aware that our 124 Spiders are Rear-Wheel Drive (RWD), and should our vehicles ever need to be towed, familiarize ourselves with the three allowed configurations shown in the illustration above, as the rear wheels of a 124 Spider being towed should not be on the ground, especially if you have an automatic transmission.  You’ll want to be confident that the tow-truck operator is also aware that you have a RWD vehicle before he attempts to hook up.

Towing your 124 Spider with the front wheels on the ground (top illustration) is probably the least desirable of the three configurations, as the front end of  the vehicle may encounter some damage, especially if the rear end is hoisted up too high and the road surface is irregular.

Having your vehicle transported in a trailer or on a tilting flat-bed truck is the most desirable method.  If the vehicle can not be driven onto the flat-bed, remember to remove your tow hook out of the trunk (and even install*) for the tow truck operator prior to him/her winching it up, so that the strap/chain hook can be attached to that, rather than some easily-damaged “gram-strategy” cross member or linkage on the underside of the vehicle.

If the vehicle is Automatic and is to be winched onto the flat-bed and you don’t have access to your key, know that you can override the shift-lock so that you can disengage “Park”. 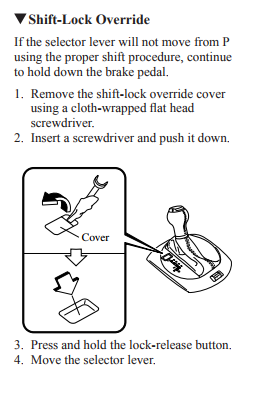 *       Although the front tow hook cover is easily removed from the grille without tools,  by doing so yourself, you can insure that it is removed carefully and safely stowed away so that it won’t get lost/damaged, assuming of course that the vehicle is oriented such that it will be winched up from the front.

If the vehicle is oriented such that it will be winched up from the rear instead, you might want to carefully pop the tow-hook cover off of the rear fascia yourself (using a key or small screwdriver instead of your finger), so that the painted surfaces won’t be damaged, and again stow it away.