The Fiat 124 Spiders do not come with CD players, so in comparison to Mazda Miatas, the cubby (glove box) between the seats in the rear bulkhead is extra deep.  Because it will hold more items, they can be more difficult to find, especially in the dark since the one interior light in the car doesn’t do much back there.  These ideas can be just as useful in the MX-5s though…

At Amazon *, for $10, I found a USB rechargeable, wireless, PIR motion-sensor activated LED light with a base plate bracket that it snaps into.  It contains 6 bright 5000K SMD 2835 Epistar LED chips and a 600mah polymer lithium battery.   I was glad I purchased a two-pack, as I was so impressed with the first LED light in my cubby, that I installed the other one in my trunk to supplement the inadequate factory “trunk light”.

I cleaned the top interior surface of the cubby with rubbing alcohol and attached the bracket with the included 3M double-sided adhesive strip.   With the switch in the AUTO position, the light comes on for 15 seconds automatically as soon as you open the door and do something that triggers the motion detector, like reaching for an item with your hand.   If you’d like it to stay on for a longer duration, either keep the motion detector happy or select the ON position instead.  No wiring required!

To recharge the unit, simply unsnap it out of the bracket and plug it in with the included USB power cord (or any other micro USB cord already available).   The brochure for this light stated:

If you want to use the LED unit elsewhere, for instance for a night-time tire repair, unsnap it from it’s bracket and attach the unit to a fender via the built-in magnet.

This sounded practical until I realized that, other than the door panels and the rear quarter panels which are steel, the rest of our car exterior is plastic and aluminum.

*  The Amazon merchant I bought from must have sold out as the link no longer worked, so I’ve updated the link to a different Amazon merchant that hopefully keeps these is stock, but in case that link fails in the future, use Google to search for:
Rechargeable Wireless LED Night Light, PIR Motion Sensor 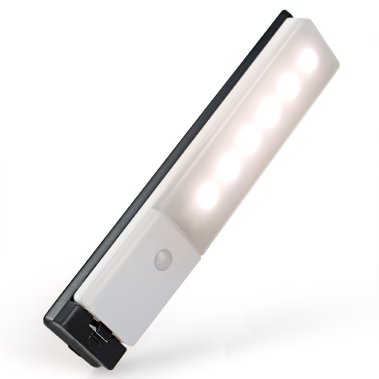 I also had a shelf laser cut from .220″ clear acrylic so that the light could pass through to the rest of the cubby.  It snugly fits into the 3 cutouts in the rear of the cubby and the front rests on the shelf supports already molded into the cubby side panels.  It is very sturdy and does not flex.  If it were made of .118″ acrylic, I can only guess that it might not be as sturdy.  Right now, I’m using the shelf to store my clip-on sunglasses which are very light anyways, so the thinner material would have been fine.

If you would like to have a shelf made, Sergio (ssh16) has made a file available for FREE here that is even better than the file I had used originally, in that it gives you several options.  After setting up an account at Ponoko, you can submit his file for laser cutting, and you will end up with 3 shelf cutouts – one with tabs and 2 without tabs.  The cutouts are to scale so no dimensions are necessary and the thickness is determined by the material you order.  Your first laser cutting project is free, so you only need to select a 15″ x 15″ piece of material and pay S/H for the entire piece to be mailed to you with your shelf pieces all cut out.

The tabs can not be thicker than .120″, so if you choose .220″ material as I did, you’ll need to remove the top half of the tabs that are included in one of the cutouts, down to .120″.  A fine-tooth trim saw worked really well for me.   Leave the protective film on the acrylic until you are finished with the modifications and make sure you have the shelf oriented properly before trimming, as the center tab favors the LHD passenger side of the vehicle (if you turn it upside down it will not mate properly with the cubby holes).   According to the designer, no trimming need be done to the tabs if you order the .118″ material, since they would only be included on the bottom layer and you can glue together one or both of the other cutouts to that bottom piece (might not look good in clear though).  Again, make sure your pieces are oriented properly, as the center tab favors the LHD passenger side of the vehicle and the tabs should be on the bottom layer.

As an example, they have .106″ thick bamboo material, which is already the right thickness for the tabs, so you probably only need to glue one of the other cutouts on top of the tabbed cutout. 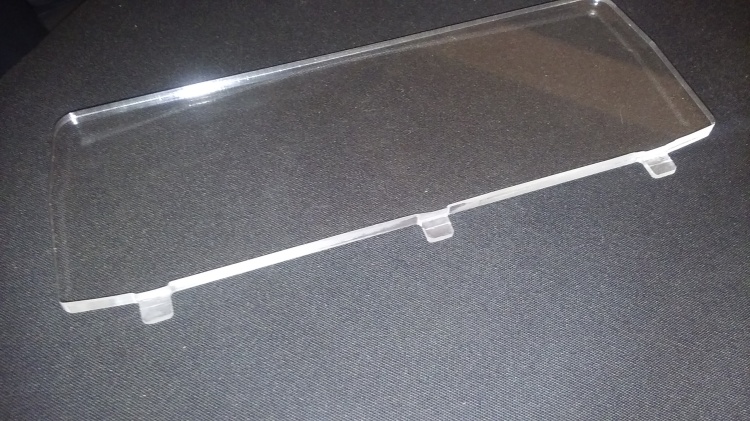 Credit for the pattern goes to  ssh16  on the mazda.net forum

This entire project cost me considerably less than the fabric shelf that Mazda sells as an option, and no riveting / drilling holes in the sides of the cubby is required.

[UPDATE 1/12/2020]
Santtu has published this drawing of a slightly different variation, for those wanting to fabricate their own shelf…