My car club encourages everyone driving in their sponsored road tours to use old-school CB radios to monitor instructions from the lead car and communicate with each other, but instead of installing a mounted unit, I’ve purchased the Midland 75-822 handheld CB, and although the performance with the rubber duckie antenna is OK if the other vehicles are in close proximity (within ¼ to ½ mile), I determined that if I wanted to serve as a sweep (the last vehicle in the tour group) or lead where you can reliably participate in the the conversations of the entire touring group, I needed a real antenna*.

I first ordered a Cobra CBRHGA 1500 magnetic-mount 36″ antenna from Amazon, but aside from it arriving bent, I determined that the quality was sub par, especially the most important piece, the rubber insulator that protects the base and magnet from damaging your paint. The rubber was WAY to thin!  So it went back and I ordered the Tram 300 Magnetic-Mount CB Antenna Kit, which is also 36″ and is a perfect solution.  It includes a very nice wrap-around rubber boot that is thick enough to insure no damage to your paint!  I can vouch that the magnet holds firm at 80 mph+ 🙂 and what a difference in the radio performance!

Looks like the handheld unit is small enough to fit into the cup holder, so I used a free 3D-print file to print a bracket that inserts into the forward passenger cup holder slot that I’ve suspended a  Rubbermaid Vent Catch-All  from, using a ¾” long M8 x 20 mm bolt and nut.  Using the rechargeable battery pack in conjunction with 8 rechargeable batteries, I’m able to get at least one full day of usage without any cords, however if you are using the external antenna, you can not use the battery pack and you must instead plug the power cord of the mobile adapter into the 12-volt outlet in the passenger’s foot well.

If the handheld CB unit isn’t loud enough with it’s tiny built-in speaker, it can be patched through the Infotainment system via the car’s AUX input using a mono patch cable.  Plug the other end into the SPK jack of the CB unit (a mono jack normally hidden behind a hinged rubber cover adjacent to the internal antenna coaxial connector).  You will find that the audio will be plenty loud now, but will only be heard from the car’s left side speakers.  Although I personally prefer that the CB audio only be heard through the left speakers, if you would rather hear the CB audio through all of the speakers, you will need to use a male stereo to female mono adapter to plug into the car’s AUX jack (then plugging the mono patch cord into it’s female jack), as mentioned here.  You will not be able to listen to FM, but Navigation audio will still be heard while in AUX mode.

Due to the placement of the 12-volt outlet, the mobile adapter has a tendency to be pulled out of the power outlet when the driver or passenger are using the CB, and 12-volt extension cords aren’t very reliable either, so I’ve found an alternate solution that are plentiful on eBay and Amazon, using the search text “Speaker/Microphone for handheld radios”, ranging from $4 to about $30.  Here is one available on Amazon, that works quite nicely.  Note that it plugs into both the speaker and the microphone jacks, but there will normally be another audio out jack in the handheld microphone unit that will accommodate your patch cable, if you still prefer that the audio be routed to your CMU aux jack, rather than to the remote Speaker/Microphone.

Very lightweight, and much easier to hold rather than the Handheld CB itself. 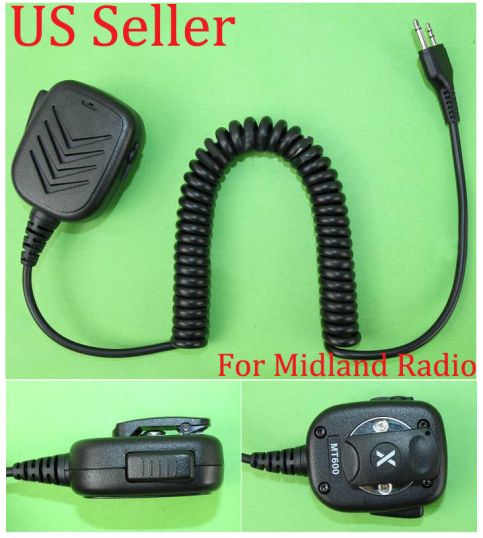 *   The only horizontal steel surfaces available on the Spider for a magnetic mount antenna are the:

The trunk lid itself is aluminum, so the magnetic mount won’t work there.  If you are using an external antenna, keep in mind that you must use the mobile adapter (shown on the left side of the top photo, rather than a battery pack.

⇓  Regarding the antenna installation, Mark Booth  has an excellent writeup (photo below is his as well; used with permission) on modifying the AM/FM radio mast on his ND Miata (same as the 124 Spider), so that it can also serve as the CB antenna.  Please note however, that although the modification was easy on previous versions of the Miatas (NA, NB &NC), the job is much more difficult in the current configuration, since an antenna disconnect jack is no longer used at the antenna –  the wires are soldered directly to the antenna/amplifier module.

The raised chrome tabs provided in the hardtop mounting wells, located just ahead of the decklid on the NA, NB & NC, are no longer present in the ND MX-5 and the 124 Spider (the wells are there, ),  and since they made for a convenient location for a CB antenna mounting bracket, it is much more likely that a magnetic mount antenna will be considered, rather than a bracket mount, at least for the 124.

⇓ The weld-nuts are definitely present in the 124GT model though, for mounting the carbon-fiber hardtop.

Regarding the installation of a mounted CB radio unit, there really isn’t room to dash-mount a CB radio in these little roadsters, but I had an idea for those considering installing one.   Since CD players aren’t installed in the 124 Spiders, the DIN slot dedicated to the player (because they are standard equipment in Miata’s MX-5 until MY 2019) might be an ideal location.  As an example, shown below is Uniden’s Pro510XL CB with RF Limited’s optional mounting bracket.  The “delete CD player” blank panel covering the opening should just pop out.

[UPDATE 6/15/2021]
The larger glovebox that we gained because of the deleted CD player, makes this idea impractical.   This is what is behind the blank panel now  ⇓

I’ve also read that a “CD prep” harness may even be in that location if you have the Bose system, which would at least give you the power feed, although the amperage capability may be questionable.   I also noticed that Cobra makes a CB unit that has Bluetooth capabilities and wonder if it may pair up nicely with the Infotainment system.

A much simpler solution though is to simply use a handheld unit with an external antenna, as I do, and if the audio isn’t loud enough, patch it into the Infotainment system through the AUX jack, which works very well.