For those 124 Spider (and MX-5) owners that don’t have the Bose system and are willing to sabotage their carpeting in order to gain more legroom on the passenger side (for both LHD and RHD vehicles), know that there is a styrofoam “foot support” wedge occupying the space reserved for the 6.45 pound Bose “subwoofer” module, so that the fitted carpeting fits either configuration.

Rduffy6 in the Miata forum was so in need of more legroom, he removed his actual Bose subwoofer and stated…

The initial part of taking it out was very easy and when I sat down and pushed my feet through the carpet I could actually fit comfortably in the passenger seat for once! I could even stretch my legs straight and I’m 6’2″. I do love the extra depth [in sound] the sub added but sitting comfortably and not having my knees crush into the dash was worth the sacrifice for me. The toughest part was cutting through the carpet in a brand new car

Unfortunately in order to take advantage of the newfound space, you have [to] reshape it and that can’t be done without cutting it. I ended up cutting it twice . Both cuts started at the top of the carpet dead center I went down on an angle to the left the first cut and then down to the right for the second cut. That enabled me to push the carpet back to the sides of the wheel well and lay the middle down flat I then used some foam pieces I had to fill in a couple of voids on the bottom of the floor (subwoofer and foam filled them before) and covered it back up with the carmat. There was one piece on the left side that was exposed after doing this so I used a piece of the cut carpet to fill it in. All in all this won’t be for everyone because of the fact that you have to cut the carpet but for me it was a lifesaver because I just couldn’t fit comfortably before the mod. It feels a thousand times more roomy down there now.

But for the slits in the carpet, it probably would be easy to return the Bose subwoofer back into it’s intended location at a later date.

Being that there are no pedals on the passenger side, the passenger will end up having even more legroom than the driver (43.1″), which could indeed be a “lifesaver” if their 6’2″ body is attributed more to long legs, rather than a long torso.  Other than putting the top down, gaining more headroom is not so easy.

I can’t remember or find the thread anymore, but I remembered from somewhere that my “Sport” has a space-wasting block in the front of the footwell, rather than a subwoofer…

So, tonight I removed the door sill, pulled off the kickplate trim, pulled back the carpet, removed the one plastic button (phillips head), and took out the styrofoam block.  Following the advice from that other thread I can’t find anymore, I made a couple slits in the carpet so that it would lay more flat… On the right/outside side this is easy, and the slit is covered by the kickplate trim. The left/tunnel side required a longer slit, but it’s all covered by my WeatherTech floorliner (which also easily flexes forward).

If I stick my head in the footwell (!), then I can see the newly exposed white/grey sound dampening material at the top of the front of the footwell (under the dash) but sitting in the car it’s invisible (photo below).

I cut a small hole in the carpet in the middle of the footwell, too, so that I could re-use the button that held the block in place to hold the carpet in place.

The difference is amazing. That block is 5″ deep (actually 6″, counting the intentional air gap for the emanated sound), but the difference is as night’n’day as adding 5″ to the inseam of a pair of pants.

I’m 6’0″ or so, and before I could never have been comfortable in the passenger seat because of the lack of legroom. Now I have more legroom than I can use.

⇓  Here’s a photo he provided of the styrofoam wedge he removed to give his passenger an additional 5 – 6″ of legroom!

⇓  Here’s a photo of the styrofoam wedge that is on top of the subwoofer, if you have the Bose system. 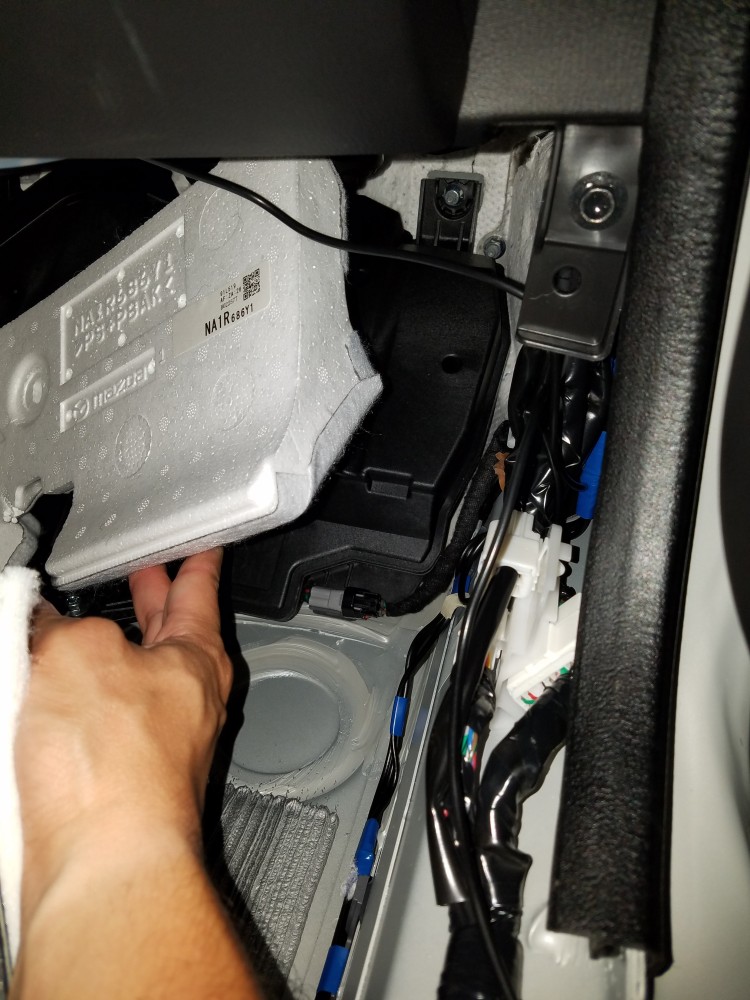 ⇓  Here’s a photo (courtesy of photoresistor) of the subwoofer, as-installed in the passenger footwell, once the carpeting and panel have been removed.

⇓  Apparently, the carpeting and slush mat leave part of the footwell exposed (covered with sound-deadening insulation).  As he later stated:

FWIW, if you take a good look in the driver’s footwell, or an unmodified passenger footwell, then you see the same white sound-deadening material is already exposed.

It’s out of sight unless you’re looking from knee-height, and people don’t put their feet there (note the muddy footprints on the floor liners that show where my passengers rest their feet in my car).
So, really, there isn’t much point to trying to cover it up (Mazda certainly didn’t think so).

⇓  Another intrusion in the LHD passenger’s foot well space is the hump next to the center console (for RHD vehicles, it intrudes on the driver’s foot well) which is stamped into the floor sheet metal to accommodate the catalytic converter in the MX-5. It isn’t needed in our vehicles, as can be seen in the bottom view, but they weren’t about to produce unique stampings, fitted carpeting and floor mats for that variance.

I imagined Rduffy6 would be looking for a substitute location for his subwoofer.  Well, I was correct as today he added…

I actually installed a 10″ slim kicker CompRT [that fits in the well] in the trunk which sounds way better than the stock sub. It doesn’t take up much space and comes right out if I need extra space.

I’m not sure how he wired in his new subwoofer, but he could have chosen one of the two methods that I’ve proposed below.  One would involve extending the two wires from the passenger foot well into the trunk (bottom 2-way connector in the diagram), and the other would be to tap off of wires 3E and 3F coming from the (hard-to-access) Bose amplifier in back of the (?) seats (8-way connector in the diagram) .  Even though the amplifier is in such close proximity to the trunk, I imagine it would involve a lot more work vs. simply extending the wire from the passenger foot well and tucking it under carpeting and door sill trim en-route to the trunk. 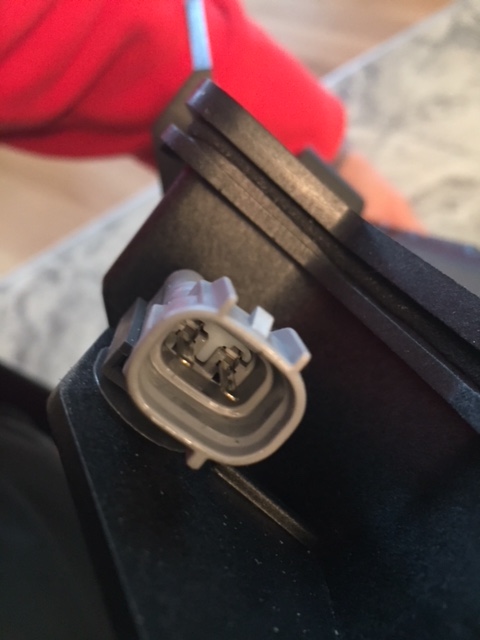 ⇓  Here are photos of the Bose® subwoofer module (click to enlarge): 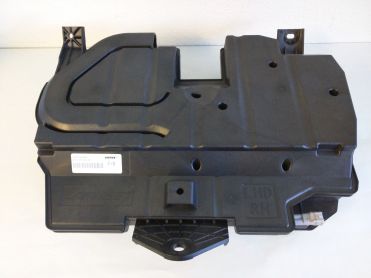 ⇓  deanb installed a JBL BassProNano subwoofer, using the Styrofoam wedge in his RHD (the wedge is symmetrically opposite) non-Bose Spider, as a mounting location, and there are good photos and instructions.

⇓  I could be wrong, but it sure looks like the Bose subwoofer module (or another small substitute) could fit behind the passenger seat.

photo of MX-5 courtesy of Blackbird Fabworx     click to enlarge

⇓  to confirm my belief that there is enough room behind the seats for a subwoofer,  jenarelJAM removed the felt cubby lining and installed a Pioneer TS-WX120A 150 W subwoofer behind the driver’s seat, and is very pleased with the results.

⇓  Another subwoofer installation behind the seats by destructo.  Yes there is room back there… 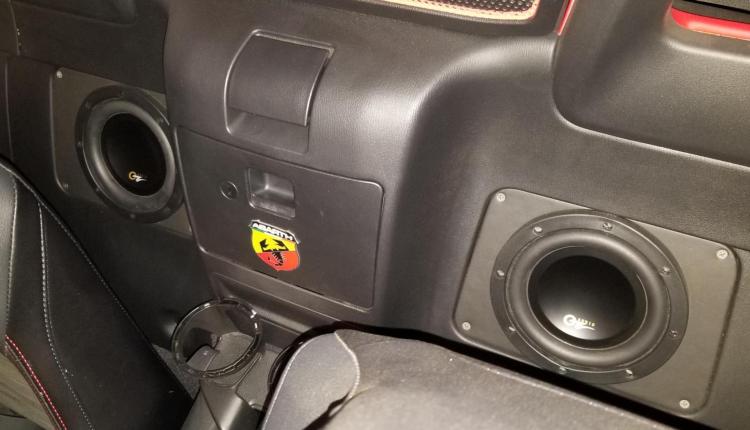 ⇓  Another subwoofer installation behind the seats by DanishDude.  His write-up includes a stl file download link for his 3-D printed mounting plate, that accommodates Peerless SLS 5.25″ speakers quite nicely!  [added 10/8/2021] Here is a link to his .3mf file alternative. 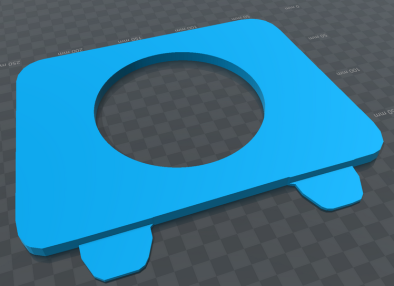 ⇓  DK-8660 found a unique location to mount his JBL Bass Pro SL 8″ subwoofer – between the mesh and the cover of the passenger seat back.  He does note that…

The only drawback being the butt-thumping for the occupant of that seat.

The adjustable crossover allows for easy installation for those with the non-Bose Infotainment system, as you can simply tie into the TAU wiring for the audio inputs ⇓  .